Middle Eastern Magic: Orphaned Land – All is One

Of all the Oriental metal bands from the Middle East, few can rival the international renown and the level of esteem held by Orphaned Land, from Israel. The sheer quality and immense variety of their music has won them fans across many metal genres in numerous nations of the world.

The line-up has changed over the decades that Orphaned Land has been performing and recording. There are and have been Jewish and Arab members of the band. The over-riding theme of their music – peace and unity – is very evident in this song, rated their most popular in a number of polls.

No doubt there are some who will complain, “All is not one, you blasphemer.” Tsk.

You’ll usually find Al Qaynah’s land of origin listed as Afghanistan. That may be partly so, but Al Qaynah isn’t a band as such. It’s an international, cross-cultural, cross-ethnic and trans-religious project. It doesn’t have a fixed line-up. The contributing musicians send their tracks to be mastered together in Copenhagen.

In a few places you may also read that Al Qaynah plays “terrorist metal”, which is patently ridiculous and exactly the opposite of what Al Qaynah really is. It does aim to project a political message. The essence of that message is that all humans should strive towards understanding and agreement and seek to set aside prejudice and conflict.

Learn more about the project on Al Qaynah’s Facebook page. If you’re a musician and want to contribute some of your work to the project, you’ll read there how to do it. 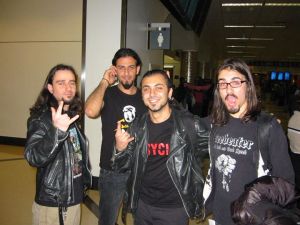 A huge amount of metal is fueled by anger at the wrongs in this world and protest against the grim clutches of oppression. Few metal bands, though, have had to endure as much grim reality as Acrassicauda, who had no choice but to flee from the darkness in their tormented home city of Baghdad. Leaving so much that they held dear behind them in Iraq, the band followed the tortuous route of the exile before finally finding a safe haven in New York.

Any form of metal has to hide in the shadows in Iraq. Extremists who continue to torture the country branded Acrassicauda as satanists. That condemnation carries an automatic death sentence. The band’s underground rehearsal room was bombed. The band began to receive death threats. Some of their fans were murdered merely for listening to metal.

The guys who make up the band – Faisal Muatafa (vocals), Marwan Hussien (drums), Firas Abdul Razaq (bass) and Moe Al Ansari (guitar) – can never return to the land of their birth. Too many evil people would hunt them down and slaughter them if they did. It’s quite something to risk your life for your art. As the band say on their Facebook page, “Nobody was expecting that in Iraq heavy metal could exist. We started and we’re not gonna stop.”

Their music is truly Arabic heavy metal played from the depths of their hearts.

Al-Namrood, from Saudi Arabia, aren’t exactly newcomers. They released their first EP in 2008 and since then they’ve released four albums and another EP. I dare say their next album will have to be super-extraordinary to top their 2014 release, “Heen Yadhar Al Ghasq”. Never mind the translation, you don’t need it to appreciate to the depth and darkness of their music. It’s, er, diabolical.

The band draws its name and the themes for its songs from a sinister character in ancient Arabian history, King Namrood. He ruled with an iron fist drenched in megalitres of blood. While slaughtering everyone and everything that annoyed him, he declared: “I am the god of all creation.” In short, he wasn’t a very pleasant chap. Whatever god he imagined himself to be was anything but benelovent. He was what a lot of modern politicians would probably love to be if they were unrestrained.

The band call their music Arabian Occult Metal. They call their Facebook page their “Center of Oppression Control”. If you want to experience the tingling exhilaration of the blackness, give these guys a spin.

Here’s a merry melody, the title track from their 2014 album. If it summons demons, then Al-Namrood’s job is done.

Middle Eastern Magic: Acyl – The Birth of an Idea

The word “acyl” is Arabic for “genuine, authentic”. The band took that name to mirror their dedication to a concept of ethnic experimental metal that started forming in 2006.  To date they’ve recorded one EP, “The Angel’s Sin” (2010) and a truly remarkable album, “Algebra” (2011). They don’t churn out songs. They won’t record anything until they are 100% satisfied that the song is 100% right.

The result is a small but extraordinary and beautiful volume of work. It combines Arabic musical structures and instruments extensively with Western rock and metal. It is an outstanding salute to the ancient Berber culture of the Algerian Sahara.

The band is on Facebook and well worth visiting. Their music is so rich and varied that I’m posting two songs to give you a better glimpse of their scope and variety.

For me, Sand Aura puts in all the elements that I love most in prog metal – fire, passion, extraordinary musical variety, excellent and deep clean and dark vocals, changes of tempo, almost operatic passages in counterpoint to powerful driving melodies, and that delicious flavour of Middle Eastern spice. Listening to an album by this band is good excercise for the skin, too – all those goosebumps increase its flexibility.

The band is from Egypt. I love them for more than their fantastic music. They are admirable musical ambassadors. In describing the concept behind their music, they say: “We are all humans, and [we believe in] the unification of all cultures, religions and historical backgrounds of the new age’s concept.”

You’ll find Sand Aura on Facebook. Get to know them better. They’re more than worth it. They may be at the other end of my continent but they make me extra-proud to be African.

Few Oriental metal bands can match Khalas when it comes to integrating traditional and classical Arabic music with Western hard rock and metal. They’re sometimes known by the name of their album “Arabic Rock Orchestra”. The band was formed in the city of Akka in Palestine.

Meet the guys on Facebook and confirm yet again that honest metal doesn’t bother with national, ethnic or political boundaries… sharing the music comes first.

Yagbu, from Anatolia in Turkey, play a style of folk metal that could almost be folk black. What makes it so different is the exotic sound of indigenous instruments. Their Oriental folk metal is steeped in the history, traditions and ethnic unity among Anatolians. As one might expect with most folk music, their songs resonate with epic events and heroism.

As mentioned in the first part of this series yesterday, our intention and hope is to introduce the richness and variety of Oriental metal to everyone who doesn’t know a great deal about Oriental metal but does love bloody good music.

Arsames is a melodic death metal band from Iran, a country not particularly known for encouraging any type of metal. Their style is fairly brutal – you could grate concrete on that voice. Any form of death metal is officially branded as satanic in Iran. These guys are literally sticking their necks out for the sake of their art in a society where it’s illegal to listen to death metal, never mind actually play it.

The music of Arsames draws deeply from the myths and legends of ancient Persia, which became Iran. Pardon my vile language, but the attitude of these guys is: “Fuck the politics, let’s make music.”

Oriental metal covers a great deal of territory, both musically and geographically. For most metal fans it remains an untapped source of excellent music.

Various Oriental metal bands play just about every kind of metal. The bands come from North Africa, the Middle East, India, South-East Asia, China and Japan. Some top-class Western bands do super Oriental metal too. What usually characterises any Oriental metal is the fusion of Western metal with ethnic musical structures, melodies, themes and/or instruments.

I’m sure I’m half Arab as well as half Jewish, half Zulu, half German, half Hindu, half Irish, half Viking, half Ginger Tabby Cat and half of other nationalities that can’t do arithmetic with fractions. Arab music in any form makes me tingle. When it’s Arab metal, I tingle with considerable vigour.

For your listening pleasure and delight, I’d like to feature many Oriental metal bands from different countries. First up is Narjahanam, from Bahrain. The flavour of their death metal is delicious.