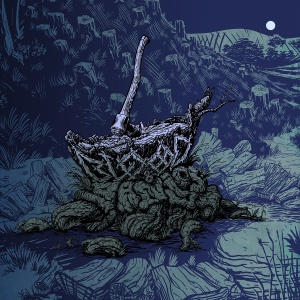 A few years ago during one of my forays into ‘that’ part of the internet I stumbled on a blog called Blood and Banjos.  It was basically about a guy, let’s call him Mike, who was kicking around the idea of making a record that combined his love of bluegrass music with its polar opposite, black metal.  He had a couple of audio clips and ideas posted up, and needless to say, as a lover of any original idea in the realm of metal, I was instantly intrigued and started following the blog regularly.  Over time Mike’s vision started to take shape and the idea of an album began to come to fruition.  He called upon friends and fellow musicians from all over the US and even Europe to offer their skills on his ideas and offer their own.  Then there was a successful Kickstarter campaign which allowed Mike and friends to realize all their ideas, demos, and musings on a full-fledged, professionally recorded album.  Needless to say there was a huge amount of passion and time invested in creating this record, and holy hell does it show!

END_OF_DOCUMENT_TOKEN_TO_BE_REPLACED

Blood & Banjos Are Awesome, And You Can Make Them Awesomer!

A bit over a year ago I stumbled upon a blog called Blood & Banjos, and with a name like that, how could I not stop and check it out.  Upon reading one of the first few posts that they had I quickly learned that the blog was to be a chronicle of the creation of an album from its inception to its finish.  The original idea for the record was conjured in the brain of project leader Mike Lindsay during a casual conversation between friends when the idea of making an album that combined the visceral, raw sound of black metal with the conservationists passion for bluegrass music.  The churning mental gears quickly gave way to Mike starting up the project of seriously making an attempt at this daunting task of combining polar opposites of the musical spectrum.  Blood & Banjos were born.

Throughout the year I kept up reading this blog, as a look into what goes into writing, recording, and conceptualizing an album from start to finish was quite interesting to me personally and seeing it being done by a group of regular Joes and not the usual ‘big rock star’ album chronicles piqued my interest further.  Then there’s the fact that they were not just creating your usual metal album, but quite an experimental take on it, my interest went through the roof.  As time went on and their posts on concepts and brief histories into the styles of music went on things started to shift from concepts and ideas towards actual songs being created.  Very neat stuff, and being the cool dude he is, Mike took the time to listen to the comments people were leaving on his blog and even embraced a few ideas for specific song sections I threw his way when he went to post up the next demo recordings.  The fact that Mike had the management capacity to be able to make recordings with his group of musicians and collaborators scattered all across the USA and EU was very neat to observe also.

Now, some of you may be thinking that the whole black metal/bluegrass combo has already been done, and quite well I might add, by the one man band Panopticon on his album Kentucky.  While this may be true, what really grabs me about the Blood & Banjos project is the angle they are approaching the concept from.  Instead of going for the intensely deep side bluegrass and metal like Panopticon did, they are putting the focus on the fun side of the genres.  Almost resembling a Broadway spectacle, the album will tell the tale of a simple Appalachian family man named Abram Stone who has been deceived by Satan into believing only himself and his banjo can prevent the coming of the anti-Christ and the coming Apocalypse.   The town’s mayor and townsfolk stand in his way and inevitable violence of mass proportion ensues.  Amazing concept if you ask me, and B&B take it a step further by taking the time to actually cast various musicians and singers to fill the various roles in the story.

So after a bit over a year of conceptualizing and writing, Blood & Banjos have finished the first phase of production and have even released some awesome demos (you’ll find something to listen to at the bottom of this post) and now starts a phase where they really need the help of music fans everywhere.  I’m sure you know getting quality recording of ones music doesn’t come cheap, and even for the more economical options a pretty penny must be spent.  Being the regular Joes they are with day jobs and the like, dropping 10 grand for an album recording just isn’t in their personal budgets, but fortunately, this wonderful thing called Kickstarter exists and could very well ensure that the bands dreams of seeing this project come to life does so at the highest possible quality.  While the band states that even if they don’t meet their goal, they will still see this project through to completion, but wouldn’t you like to hear such an awesome concept for a record come to fruition as shiny as possible and actually know that you were partly responsible for that happening (c’mon, everyone one loves bragging rights even if they don’t admit it 😉 ).  So head over to the bands Kickstarter page, make a pledge, get yourself some cool perks (that poster is looking mighty fine), and support independent music, cause without it we’d be stuck listening to the same old stuff that the major labels habitually pump out.  And it should go without saying, share the Kickstarter with as many as you can, you could be the one responsible for the really rich dude that has a passion for both metal and bluegrass music and has a hankering to toss a few grand at the project, I’m sure Mike and the rest of Blood & Banjos would be very appreciative.  Enjoy!!!  Peace Love and Metal!!!!!

Demos will be added to the bands Bandcamp as they are released, you can hear a couple in the player below now 🙂

Tales From Bandcamp: Nine Waves From The Shore by Celtachor

In the folk metal realm there are quite a few band that take lots of inspiration from the Celtic sounds of Ireland, but in fact they all almost hail from a different part of the world.  So, naturally I wondered, where’s all the Irish Celtic folk metal bands; that’s when I stumbled upon Celtachor.  When I first heard them at some point last year they just had a rough demo album out, and for all the things good in it, there were some, well, rough edges that halted me from putting a big recommendation behind it.  If it did have one thing going for it, it was apparent that the band members were totally into what they were doing and my gripes with it were points that could easily be improved on (namely pacing and recording quality, but it was a demo, so I really can’t fault it too much).  Fast-forward to now, and Celtachor has just released their debut full length album, Nine Waves From The Shore, and totally nailed it out of the park.

Celtachor play a blackened style of folk metal and have much more in common with bands like Moonsorrow than say Eluveitie or Suidakra.  The music contained within the record is both visceral and strikingly beautiful and more importantly well constructed, albeit with a couple pacing issues that really don’t hold back the fact that Nine Waves… is an excellent record.  Bouts of whistles and occasional tribal drum beats mesh wonderfully with the Immortal/Emperor style of black metal.  There are also some melo-deth and progressive elements tossed in for good measure to keep the pacing strong and diversity interesting.  Some great solos and grim vocals reciting Celtic lore give the record a nice atmosphere and in the end make it a very engaging listen.  I also like the folk interludes spattered throughout the songs which contribute to that excellent atmosphere.  All in all, everything on their new record is very well done and is a massive improvement over their demo album.  So, give yourself a treat and give Nine Waves…. a listen and share with your fellow metal brethren.  Being the first album released in 2013 so far, it gives me a feeling that 2013 is going to be yet another landmark year for metal.  Enjoy!!!  Peace Love and Metal!!!