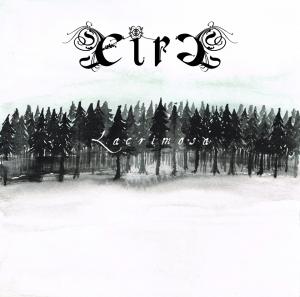 Albums:  This is their debut album.  EP A Death Painted Portrait in 2012

What won’t you hear on Lacrimosa?  You won’t hear any filler, looped rhythms, or purposeful breakdowns.  It certainly won’t bore you to death or make you want to fast-forward to the next song.  What you will hear is an incredibly wide-ranging barrage of all things deathly, blackened, and progressive.  It all starts with an elegant opening for Footprints in the Falling Snow.  It seems harmless enough until the growling vocals, double bass drumming, and rhythmic riffing carry the song onward into a fantastic representation of what is to come.  It’s not the heaviest song on the album, but an excellent introduction to some seriously quality mood-inducing metal.

As the album progresses, the songs will move you.  It is easy to get lost in the various elements of their song composition.  Bereavement injects a harmonious acoustic guitar for its introduction before becoming the blackened beauty of a song. Flicker, however, is thick with technical/progressive competence from the start before it slows to a crawl near the end.  From beginning to end, the album boast very few flaws; none that I could find except maybe a likeness to classic Opeth.  Is that really such a bad thing?  No, not really.  For a debut album, it will be interesting to see where Eira goes from here.  Lacrimosa bleeds complexity and melody while embracing the blackened side of metal and putting it all together in a formula that works beautifully.