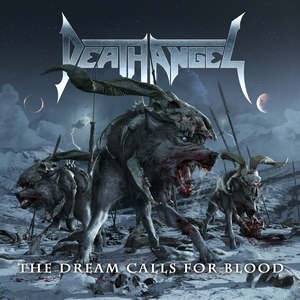 Since I first caught their debut album, The Ultra-Violence (1987) back in my young impressionable years I have been pretty much hooked on Death Angel.  I certainly appreciated the rawness of Frolic Through the Park (1988), and their Act III (1990) album is my favorite from them even though they embedded a certain funkiness into that one.  Of all the bands that disappear for one reason or another, Death Angel is the one I wanted to come back more than any that I can think of.  And, they did just in a different form called The Organization which took shape after Death Angel’s bus accident and eventual break up.  The Organization didn’t live up to my expectations, but it was cool to see four of the five guys (minus Mark) back together again under the new name, but it wasn’t the same and it ended in 1995.  When I got wind of the Death Angel reunion and ensuing album The Art of Dying (2004), I couldn’t have been more elated.  But, for now, let’s talk about the present.

The Dream Calls For Blood hit me like a ton of bricks.  After coming off Relentless Retribution (2010), I figured the band would head off in a more streamlined and modernized direction…the kind that gets played on the radio.  I guess I would have been ok with that, but The Dream Calls For Blood is like getting slapped in the face from the minute Left for Dead takes off from the short intro.  In fact, the entire album is largely uncompromising riff-heavy Bay Area thrash.  With a few exceptions such as Succubus and Territorial Instinct – Bloodlust which are a bit slower than the rest, the album is full speed ahead most of the time with some catchy choruses here and there.

One song that stuck in my head instantly was Detonate.  The opening riff reminded me of something, but it took me a fee seconds to figure it out.  As I was perusing Frolic Through the Park for the answer, I found that Detonate eerily resembled the opening riff to Devil’s Metal and nearly the whole opening section of the song.  The similarities stop there, but both songs were comparable enough for me to recall the song on Frolic.  I won’t say they plagiarized themselves, but if you have both albums, you should check it out.

Since Death Angel’s reunion, The Dream Calls For Blood is their fourth output and probably their most vicious overall effort since their iconic debut album when they were teenagers.  They have retained that nostalgic Bay Area thrash sound while pushing forward carving out another niche for themselves and I think it’s working well for the band.  The new album reminds me a bit of Overkill’s recent works; not in sound, but relentless high-output energy surely worthy of your time…if you like thrash.  And just a side note, the extended edition features a cover of Heaven and Hell.  Rob actually did a good job capturing Dio’s spirit.

In case you never heard of or knew The Organization existed, here is a clip.  You can see where they took Death Angel’s Act III funk vibe and took off with it.