← Mik’s Top 100 Favourite Albums of All Time #61-65
Album Review: Five Finger Death Punch – The Wrong Side of Heaven and Righteous Side of Hell Volume 1 → 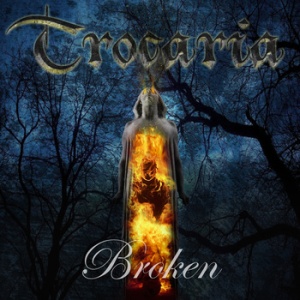 Trocaria is a female-fronted dark metal band out of North Carolina.  They were featured here once before when they released their EP The Dark Nears which you can check out here.  Now, Joan Palmer is the sole proprietor of Trocaria and has released her second EP, Broken, which contains five songs including a Bathory cover of The Lake.  A band that goes against the grain of American popularity, Trocaria continues to lace together dark melodies and combines them with brutal elements of both haunting and guttural vocals all sung by Palmer.  She’s been busy.

Buried Alive kicks things off with a bit more ferocity, much more than I remember from her previous EP especially with the guttural vocals and rhythmic gallop of the drumming.  It’s an in-your-face kind of song for which I certainly appreciate.  The song holds its own through and through and stands out on the EP for being aggressive…in a good way, of course.  Broken takes a more symphonic approach in the beginning.  Growling vocals backed with a haunting melody lead into some clean signing about half way through the song.  The extreme vocal changes contrast each other nicely on Broken.

The Fall of Jeshua is the shortest song on the EP at just under two and half minutes.  The instrumental combines varied elements of symphony and darkness and centers around a haunting piano piece.  It almost feels as if it is a transition song leading up to the end of the EP, Act II so to speak.  Machine gun fire and small explosive devices introduce All is Fair in Love and War.  This dark song features growling and spoken word.  It reminds me of a Cradle of Filth song where you have Dani Filth doing his thing and Jezebel Deva speaking her parts (from older CoF albums).  Occasional war sounds make an appearance in the song again along with tight double kick drums and symphonic elements.  It’s a strong close to the set of original songs before the Bathory cover.

I have little experience with Bathory, so I had to find the original song to make the comparison.  After hearing both, Trocaria stayed true to the original musically, but took both the guttural and clean vocal approach.  I never knew Bathory had such haunting music, I thought they were dedicated Black Metal.  Overall, Trocaria crafted a dark metal EP that blended haunting symphonies with a blackened doom that expands upon their first EP, the Dark Nears.  To hear something like this come out of the United States is refreshing as we are not known for this style of music let alone anything like it under the umbrella of metal.  Below you can check out the EP here or at Bandcamp.  Enjoy!

← Mik’s Top 100 Favourite Albums of All Time #61-65
Album Review: Five Finger Death Punch – The Wrong Side of Heaven and Righteous Side of Hell Volume 1 →